The problem with the church in Corinth is believers who are supposed to be in Christ are exhibiting worldly wisdom over and against Godly wisdom. Paul’s concern is for the church in Corinth and not everyone, meaning he is not writing this letter to convince unbelievers but to convict believers of their errors. In this case, the error at hand is double-mindedness. On the on hand, they should want to have the mind of Christ, but on the other, they display a misplaced zeal for the mind of the flesh.

For the church in Corinth, this double-mindedness manifests in partisanship. Claiming to be “of Paul” or “of Apollos” is dividing the body of Christ. While the names have changed, the divisions have not. In the 21st Century there are too many Christians who say “I am a Republican” or “I am a Democrat” or “I am of this Pastor” or “I am of that Theologian.” One problem partisanship produces is jealousy and strife.

In order to get this message across, Paul chides the Corinthians with immaturity of faith. Needing to speak to them as babes in Christ and feeding them the milk of the Gospel rather than the meat of doctrine means they have not yet set the proper foundation. (July 24, 2022)
The immaturity of the Corinthian church manifested in partisanship along pastoral lines. Paul has heard that factions emerged claiming to follow his teaching or that of Apollos or of others. These party distinctions are normative under worldly wisdom but are unwelcome in the church.

The reason such divisions have no place under godly wisdom is because Paul, Apollos, and any other preacher or pastor is quite simply a servant of God. Paul may have planted the church in Corinth and it may have seen tremendous growth under Apollos, but this growth cannot be attributed to either men but to God alone.

This is a strong word of warning to churches today that have a tendency to create a cult of personality around a particularly charismatic leader. Likewise, preachers and pastors cannot let success (or the lack there of) distract them from their true calling, which is simply to preach the gospel in season and out of season.

More striking is Paul’s agreement with James that teachers of the Word will incur a stricter judgment. Each planter or waterer will receive a reward proportionate to his labor. This hits personally, for my responsibility as under-shepherd of minister of the Word is first and foremost to God my master. (July 31, 2022)
While pastors and preachers will get a closer scrutiny, this does not mean the rest of the congregation is off the hook. Paul begins now to drive home the very weighty matter of the work all Christians are to put into building the Temple of God.

​No building will be able to stand without a solid, firm foundation. If the foundation is cracked, it cannot stand. If the foundation is made of varying materials, it cannot stand. If the foundation is made of shifting sand, it cannot stand. As the wise master builder, it was Paul who laid the foundation of Christ alone for the church in Corinth. No other foundation will do. In this section I highlight four false Jesus’ too many churches are built upon.
​
The foundation isn’t the only part of the building. A house is not a house if it’s just a cement slab. Without the right foundation, a house cannot be built, and a house must be built. This then is the responsibility of the church as a whole. Every member of a congregation is tasked with building on the right foundation of Christ, and Paul knows each person will bring different things to the table. He encourages us to build with materials that will last: gold, silver, precious stones; as opposed to relying heavily on wood, hay, and straw, which are easily consumed by fire. In this section I focus in on Paul’s teaching on divine testing and heavenly reward. (August 7, 2022)

“The Temple of God”

First Corinthians 3:16-23
Paul ties together the imagery of building on the right foundation by highlighting what it is that’s being built. That, of course, is the Temple of God. This is no physical edifice, but a spiritual one. It is not marked by physical boundaries but by holiness. It’s architect and architecture are known and loved by builders. It’s supports are godly wisdom rather than profane folly.

​These are the precious stones, gold, and silver with which the believer ought to build. Doing so produces a humility and submission to the Triune God, who is present and active in our justification and sanctification. (August 14, 2022)

Download File
The spiritual Temple of God is to be built with choice materials, sparing no expense when it comes to construction. This, of course, is usually the mindset of someone building their own house. The only reason one would willingly use inferior materials is because the cost of superior ones is too high. In architecture, this can provide an immediate solution but will likely pose problems years down the road or during a trying event. The same is true with the Church as the Temple of God. If Christians use inferior materials to build, compromising integrity for a false sense of harmony, that building will not stand under the trials and testing God has in store.

The only reason why a church or Christian would allow worldly wisdom to infiltrate is because they would rather boast in men than in God. Boasting is often considered a negative action, but the Bible shows to boast is actually a neutral act of praise or glory. The error occurs when an object is attached to that boasting. If the object of boasting is man, then it is a grave error. If the object of boasting is God, then it is a wise act.

The Christian is able and encouraged to boast in God because of the finished work of Christ in salvation. The assurance of the believer is what gives him or her the power and privilege to know all things belong to us because we belong to Christ and He belongs to God. The logical conclusion is that, through Christ, we belong to God eternally and securely. (August 21, 2022) 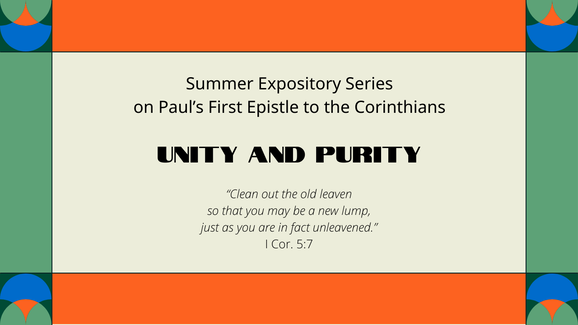